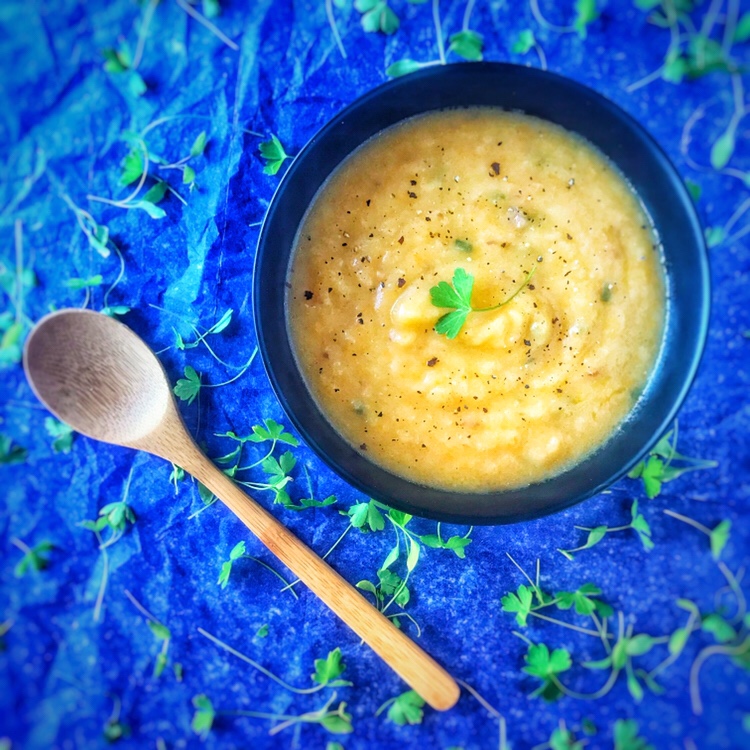 Before I get into how a loaded baked potato soup can possibly be healthy, I bring you the following PSA:

Make this the year you get yourself a hand blender. This little tool is a must have for all your favorite healthy soups, and you know soup season is officially upon us! Getting a hand blender is your kitchen’s version of taking all of your cashmere out of storage. (Side note: if you follow this blog, you probably know by now that I am obsessed with cashmere and it is an important part of my life that I will not stop talking about. I keep a huge cashmere sweater in my office at all times and wear cashmere all year long because A.C. is the devil and dry cleaning is a necessary evil. ☃️😈☠️)

Anyway, how did I have the gumption to put “healthy” and “loaded baked potato” in the same recipe name? Thanks to that hand blender and a secret ingredient, you will think your tucking into a soup loaded with cheddar, butter, and sour cream, but you would be mistaken. I promise you, this recipe is not misnamed. No shams here at Baboy Club NYC!

What is the secret to a soup that is healthy and also full of indulgent flavor? First, there aren’t that many potatoes in this soup. By volume, there are nearly as many leeks as potatoes. And potatoes are the only ingredient in this soup that I can think of that a health food purist could find issue with.

Second, non-fat yogurt. Yup! This stuff is magic and not just for breakfast! 💫

Oh, and did I mention it is also super fast and easy? GET ON THE HEALTHY LOADED BALED POTATO SOUP TRAIN!

You can make this soup with any kind of potato, but if you use a starchier version like Idaho or Russet, you may need more stock. I used red new potatoes from Garden of Eve Farm (part of my GWCSA farm share) and, even though it is a high-moisture potato, the finished product was still creamy and delicious.

6-8 potatoes, smaller than a fist, scrubbed clean with eyes and dark scabby parts removed, and cut into uniform pieces (I like to leave the skin)

2 tbs or more of diced chives

Turn off heat and cool for 15-20 minutes, until soup is not dangerously hot because hand blenders can be messy when not wielded properly.

Add 1/3 cup of non-fat yogurt and blend with hand blender until silky smooth.

Stir in chives and garnish with more chives or micro greens (or chopped bacon cooked extra crispy if you’re really going for a full on loaded baked potato flavor). Crack pepper over the top and enjoy!

Here’s the pin to save this recipe for later! 📌